Wizard World is about more than just the cosplay, it’s a celebration of all things geek and this year with Bruce Campbells Horror Fest upstairs there was even more to celebrate.

Chris Kuchta is an artist that specializes in the horror genre. He has been drawing monsters since he was young, but has only been doing it professionally for about 10 years. He sees inspiration for his art everywhere; from classic painters to modern comics, they all give him ideas. My personal favorite is Big Trouble in Little China, in fact I picked it up several years ago and have it in my library. 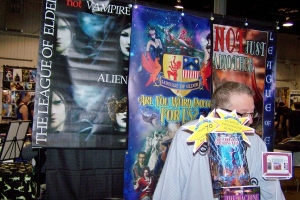 The banners on this booth caught my attention, the art work on the banners was apparently done by Carol Phillips. They were peddling a series of books called the League of Elder by Ren Garcia. It is a series of five books (so far) based on a sci-fi world that combines history with space travel. It’s a classic love-hate relationship between civilizations and individuals.

Unfortunately I did not get the name of this company, but they have adorable hand made stuffed dolls. They’ve taken an old school classic and redesigned it with modern characters.
EDIT – Thanks to my friend Cliff I now know the name of the company that makes these adorable plushies. They are Night Owl Workshop

Pesceffects is the artwork of Jerry Pescoe. He does beautiful metallic art that makes even the darkest subject bright, yet eerie. It’s almost a fluorescent and black light look that is hard to describe, but it really stands out in your mind. 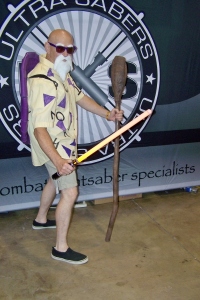 Ultra Sabers, a very popular name at Wizard World and there was no way you could miss them with a huge booth dead center front. I’m sure they did spectacular sales as there was always a line to pick up light sabers. They had them in a variety of colors, lengths and handle types. Even Master Roshi had to pick one up for himself.

Natural Selections was there with a variety of popular oddities, mostly in the form of dead creatures that had been stuffed or preserved through others means. It was a great learning opportunity for children to see skeletons and skulls of creatures they might have not seen before. I also saw a lot of fascinated adults. They are part of SkullStore which is Canada’s top supplier of ethically and sustainably sourced natural history products. 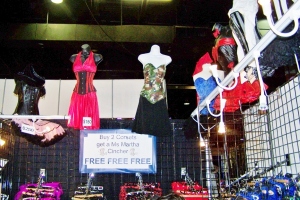 Ms. Marthas Corset Shoppe was in attendance and they had a great variety of corsets, bodices. They seem like a decent quality too. If you’ve bought from them, let me know what you think of it.